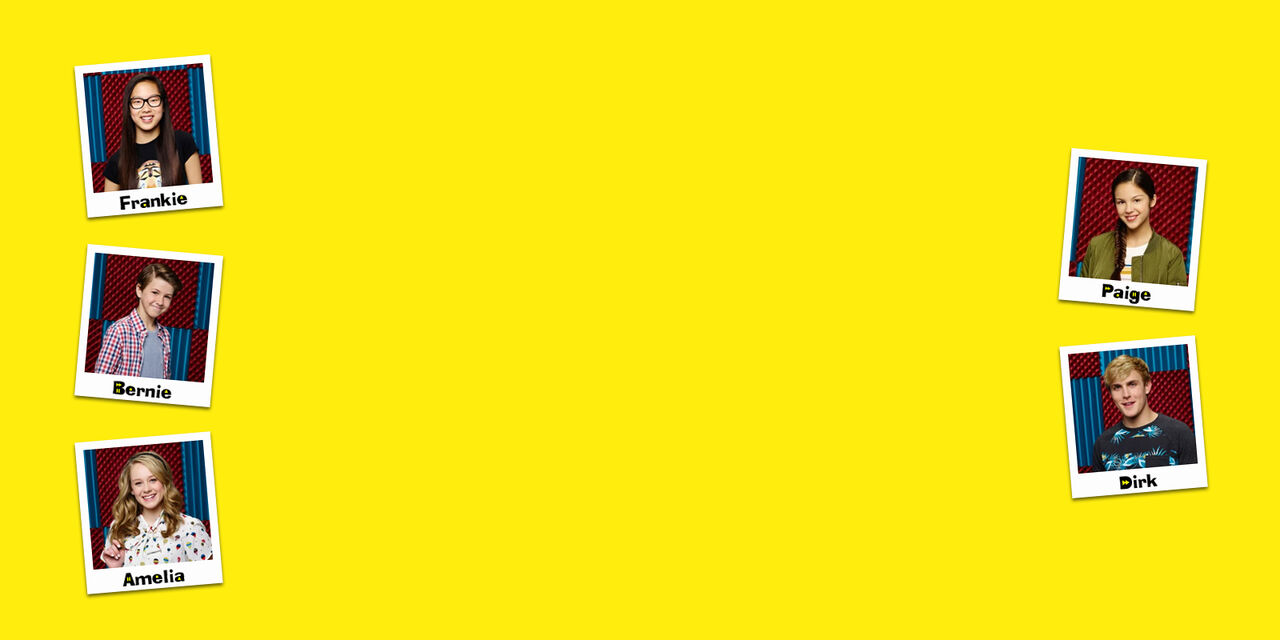 What's on your mind?

So ummm I just started watching bizaardvark a few weeks ago and I love fandom, so I was like- OH IS THERE A BIZAARDVARK WIKI?

Well turns out there is but it hasn’t been used in... wait for it-

WE NEED TO REVIVE BIZAARDVARK WIKI

Edit- I also found out there's a "Humans" category. Humans as opposed to what?

It seems only fitting that we list the Bizaardvark shorts on this wiki. There are dozens of shorts that aired separately from the series. They premeiered on YouTube but also aired on Disney Channel separate from the main series and were listed on Disney Channel's calendar and sites like Zap2It as a separate series. Disney called them Bizaardvark Shorts. I would like to suggest adding another menu item to this wiki under Episodes saying simply Shorts.

There were two seasons of shorts that aired concurrently with Season 1 and Season 2 of the main series. Most sources such as this one only show the second season: However a full list of both season's episodess can be found here: Zap2it only listed the second Season on their site which could be why most sources don't show the first season.

I don't count music videos that aired as part of the series as shorts. "Bad Hair Day" for example premiered at the end of Pretty-Con.

(edited by Brainsouth)
I just notice there are no gamers in vlogged and Bizaardvark supposed to be a parody of Youtube and Vlogged do not have Gamers but Youtube does. I hope season 3 bring Dantdm or other gamers to Bizaardvark.
(edited by Butterfly2015)
Bizaardvark (TV series)Season 3

Jake Paul, one of the stars of Bizaardvark, is leaving the Disney Channel series, which is currently airing its second season. He won’t be back when production on Season 2 resumes tomorrow. Filming is slated to continue through the summer and wrap in the fall.

After releasing a short statement on Twitter, the mega social star addressed the situation in an honest video on his YouTube Channel.

“For both Disney and myself, after communicating for a couple month while I was on set and daily vlogging on set and while I was growing Team 10 and other business stuff I have going on, it was hard for the both of us,” Jake admits.

“Disney was a full time job and doing everything on top of that…I made it look like it was easy, but what you didn’t see is I was on set from 8am to 5pm and then come home and get everything else done. I wasn’t sleeping. It was unhealthy and it caused problems for the both of us.”

Jake also goes on to say how he grew up from the role of Dirk Mann. Check out his full video below

What do you think will happen to the series, when one of the main characters left?
Will someone replace Jake Paul? 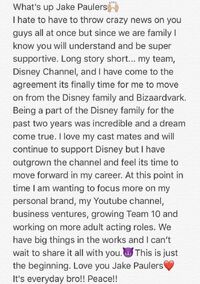 To apply for staff, go to User Rights Management. If you are interested, choose a position, fill the application and contact Andi Cruz or RuneMagle for interest. There are no positions available.

Hi users, I'm Sarah and I'm so excited to be bureaucrat and co-head, along with RuneMagle on this wiki! We are going to put this wiki back into shape and help clean it up, put more CSS and change the wiki to something great!

As some of you know, I work on a lot of wikis, and I'm really excited taking my rights back for this wiki and working here! This is such an honor and I can't wait to get started!!

Does this wiki have a tag for deleting articles, images, and what not? I recently posted a picture that I misspelled, and replaced with one with the correct spelling. I'd like the incorrect version deleted.

(edited by DanTD)
This post is locked.
I love your videos
(edited by J1j2c1c2)

PLEASE READ AND REPLY TO THIS MESSAGE. IT IS IMPORTANT THAT YOU DO SO TO OPEN UP STAFF POSITIONS.

To support the removal of the bureaucrat and adding extra staff positions and making the wiki have more active users and staff, just type in "Support".

If you do not support this, please put "Oppose"

Welcome to the newly designed, newly managed Bizaardvark Wiki. I, Disnickfanatic, am the executive bureaucrat/head administrator on this wiki right now. I will be managing the activities listed along with some of my other administrators. If you have any questions about the activities listed, you may contact me below or on my message wall. If you have any questions about the wiki, you may contact me on my message wall, but please don't put them below.

If you'd like to suggest more activities and events, you may put them below.

I am Disnickfanatic, the new head/executive bureaucrat on the wiki. Currently, I am looking for staff on the wiki. We are starting to get more viewers, so we need some people to monitor the wiki. I am currently looking for the following roles:

If you would like a role, you may find the application by going to the Apply for Staff page. After finding the application, copy it to my wall and start filling in the information. On July 22, 2016, I will be rating the applications and will be assigning roles. If you have any questions, comments, or concerns, contact me on my message wall.

(edited by Disnickfanatic)
How can I make videos
(edited by Shantea)
This post is locked.

I would like to chose admins now for the show! The design is up now and I would like to say thanks to everyone! Just apply to be admin by telling me on my message wall!

Hello users of this wiki! I am Andi Cruz or people call me Sarah and welcome to the wiki!

I come from LA, California and I love Disney Channel! I'm a huge fan of Best Friends Whenever, Girl Meets World & BUNK'D. This is just a little short paragraph about me.

This is a great show as I think having Olivia Rodrigo & Madison Hu will be a great impact to the Disney Universe as they have different strengths.

I'm excited that the show has been greenlighted and ordered.

We are going to update the theme designer soon enough and make it fancy with matching colors in 2016.

CSS will be updated later this year.

We will do Admins in 2016 so please know that if you ask that, it will be 2016 due to it not being so close to the show. I'm preparing new things for the wiki.

Any questions below? Ask!